New Project from IAS in Dubai 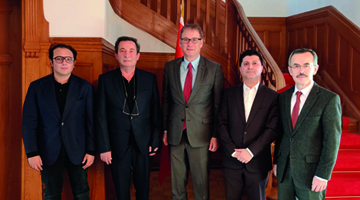 Industrial Application Software is a technology company with a global reach and operates centers of excellence in Germany, Turkey, United States, India, United Arab Emirates, South Korea and Switzerland. IAS is experiencing tremendous growth in its business and is currently engaged with companies across the globe. Since establishing an office in 2019, IAS has gained the attention of senior government executives through its increased presence in the Swiss market. As a result of these developments, Bern Ambassador Mr. İlhan Saygılı, IAS Chairman Mr. Hakan Karabiber, Board Member Mr. Can Karabiber and IAS General Manager Mr. Mazhar Tellibeyoglu met in Mr. Saygılı’s office to mark this milestone . After welcoming IAS executives to the embassy, Mr. Saygılı said he believes that IAS, which has completed successful projects in across the globe, will continue to show rapid growth. The ambassador indicated his appreciation of the importance that IAS  attaches to education and young people and plans to visit the Swiss office soon.

Sharing notes from his meetings with Ambassador Saygılı, IAS General Manager Tellibeyoglu said, "IAS continues its operations globally with caniasERP which is currently produced by Turkish engineers. Our meeting with Ambassador Saygılı was an important step in our goal of increasing market penetration in the region. The ambassador and I talked  about IAS plans for expansion, which includes finding new partners in Europe and taking additional steps to ensure continued growth. We represent our company with pride in such important meetings."